#AceFinanceReport – Apr.28: Stores in Canterbury, Guildford, Wolverhampton and Kirkcaldy are among those earmarked for closure: Earlier this month lenders to Debenhams took control in a deal which wiped out the investments of shareholders BBC News reported.

Once the 50 store closures are complete Debenhams will have around 116 stores in the UK: Debenhams also reported results for the 26 weeks to March. Sales at its UK stores fell 7.4%, which it blamed on fewer shoppers heading to the High Street.

Debenhams stores to close in 2020

Debenhams is the UK’s biggest department store chain and its origins can be traced back to 1778 and a drapers store in central London: However, industry experts said the retailer expanded the number of its stores at the wrong time – in the 2000s when customers were switching to online sales…..The expansion left the company with debts and expensive leases……………The firm’s financial situation deteriorated and last month Debenhams agreed a deal with its lenders, who provided £200m of fresh funding………Those lenders then took control of Debenhams earlier this month by buying it out of administration………..That deal wiped out the investments of shareholders, including the stake of Mike Ashley, the founder of Sports Direct…………Mr Ashley had wanted to buy Debenhams and become chief executive, but his approaches were turned down.

What does Debenhams say about its other stores?

The new owners have now announced their store closure programme under a process known as a Company Voluntary Arrangement (CVA), which also allows them to renegotiate rents at stores that remain open.

Of the department stores which remain open, 39 will stick to their current rental rates for the duration of their leases.

For the other stores the company is aiming to secure rental reductions of between 25% and 50%.

Terry Duddy, Debenhams executive chairman, said: “Debenhams has a clear strategy and a bright future, but in order for the business to prosper, we need to restructure the group’s store portfolio and its balance sheet, which are not appropriate for today’s much changed retail environment.

“Our priority is to save as many stores and as many jobs as we can, while making the business fit for the future.”

Debenhams is just one of many High Street chains to run into trouble in recent years.

The collapse of BHS in 2016 resulted in more than 160 stores closing, and House of Fraser has been shutting stores after being bought out of administration last year. 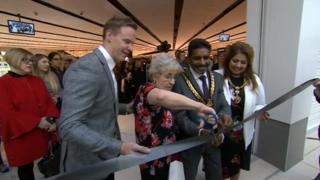 Which places have been hit hardest by the cuts?

In October 2017, locals in Wolverhampton queued up for Debenhams’ grand opening in their city’s refurbished Mander shopping centre.

Debenhams became a replacement anchor tenant for the Mander Centre following BHS’ demise. Now it will shut up shop too.

Debenhams’ arrival at the refurbished shopping centre came a decade after it set its sights on the West Midlands city.

An attempt in 2006 to set up in a £300m mall was eventually sunk by the global financial crisis.

For Wolverhampton it is another blow for a city centre that has been at the mercy of changes in retail all over the country, with the loss of the likes of BHS and Woolworths.

Will Debenhams’ landlords fight back?

The plan to shut 22 stores and reduce the rent bill on dozens more is likely to prove contentious.

Many of those stores could see reductions of 50% – that will be extremely painful for landlords.

They are being asked to back the move. But we can expect many of them to come out fighting. After a series of these restructurings on the high street, commercial landlords have had enough.

The use of so-called company voluntary arrangements is increasingly controversial.

Landlords argue other creditors do not take their fair share of the pain. Three-quarters of the retailer’s creditors will have to approve the plan.

People close to the process say it’s by no means a done deal.