#AceFinanceNews – Sept.30: It will now be considered by the 127-member FA Council on 11 October, with its views likely to impact on the board’s final decision: FA chiefs say money from the sale to Fulham owner Shahid Khan could help transform community facilities: But the plan was called “ridiculous” by former England player Gary Neville #AceFinanceDesk reports 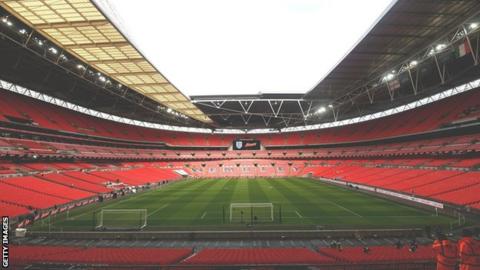 In a statement, an FA spokesperson said: “The sale of Wembley Stadium, the negotiated protections and an outlined plan to invest £600m into football community facilities, were presented and discussed at the FA board meeting today.

“Following on from this discussion, the FA board has agreed to take the presentation to the FA Council to get its input now that the full facts are known.”

FA chiefs have previously said they would not give up the national stadium unless there was a consensus within the game: The FA Council – which includes representatives of the Premier League, Football League and county FAs – does not have the power to accept or reject the deal.

“The news from today’s FA board meeting is welcomed and encouraging,” Khan said

“I understand the discussion was open and thorough. One cannot ask for more as we continue to work through the process toward reaching an agreement that will serve English football for generations to come: He added that his purchase of Wembley had “no effect” on plans to renovate Fulham’s ground, Craven Cottage, which would continue as “the permanent home of Fulham Football Club”.

What are the details of planned sale?

Shahid Khan – If you love English football, Wembley deal must go ahead

This deal is inching forwards: But it remains under threat from those opposed to selling off what they see as the crown jewels of English football: FA councillors will now get the chance to hear the plans over how the windfall would be invested and the commercial protections that will be put in place by the FA……………A further meeting is then planned with councillors to air grievances or raise any concerns………….The 127-strong body has no formal power to block the deal. But if there’s substantial resistance then it’s difficult to see how the sale could feasibly continue………………..Should it navigate that stage then the board will meet again – the date is currently unknown – and make a final, potentially historic, decision.

Pros and cons – what they say

The FA says only one in three grassroots pitches are of adequate quality and it will invest in facilities.

FA chief executive Martin Glenn: “This is an opportunity to unleash an unprecedented amount of investment into community football. Receiving an offer to sell Wembley Stadium is not a ‘betrayal’. It is not selling the ‘soul of the game’.”

Prospective Wembley buyer Shahid Khan: “If you love English football, you want this deal to go ahead. This is a very good deal for all parties involved.”

Opponents have suggested selling an iconic national venue is a short-term plan which the FA will live to regret.

Former England and Manchester United defender Gary Neville: “The FA feels to fund the grassroots programme, they have to sell a national asset – it’s quite simply ridiculous. Don’t sell Wembley when you can place a levy on agents’ fees.”

Ex-Wembley chairman and Chelsea owner Ken Bates: “I thought it was a joke at first. The FA is not a commercial institution; it is the custodian of the national game.”The proposed £600m sale of Wembley Stadium has been unanimously backed by the Football Association’s board

Average hourly earnings grew 2.9% compared with a year ago, the strongest rate since 2009. That number is not adjusted for inflation, which has been rising in recent months and eating into workers’ paychecks. And it’s lower than wage growth rates in previous economic expansions……………………..Still, the wage growth figure may be held down by larger numbers of young people entering the workforce at lower pay scales. Other measures of wage growth, such as the total cost for employers, have been rising more quickly.

“We don’t think it’s a fluke,” said Liz Ann Sonders, chief investment strategist at Charles Schwab. “We think we are at that stage where the labor market has gotten so tight that you’re going to see upward pressure on wages.”

The job gains for August were roughly in line with the average for the last 12 months, which is196,000: Employment growth was revised down by a total of 50,000 over June and July, making the last three months look more like a slowdown as trade tensions loomed. August is also commonly revised, meaning that this month’s number will likely change as well. …………………………August’s job gains were driven by professional and business services as well as health care and wholesale trade. Manufacturing shed 3,000 jobs, the sector’s first monthly decline since July 2017, although manufacturers have still added 254,000 jobs over the year………………The economy has been on a roll lately, with employers reporting difficulty finding enough workers to fill their open positions. The number of job openings has exceeded the number of unemployed people since March.

#AceFinanceReport – Sept.06: China is ready to retaliate if U.S. President Donald Trump goes ahead with a tariff hike on Chinese goods and is confident it can maintain “steady and healthy” economic growth, a government spokesman said Thursday.The Trump administration is poised to impose 25% penalties this week on $200 billion of Chinese goods in an escalation of their fight over U.S. complaints that Beijing steals or pressures companies to hand over technology #AceNewsDesk reports

China has announced a $60 billion list of American products targeted for retaliation: “ China will have to take necessary countermeasures if the U.S. side ignores the opposition of the overwhelming major of its enterprises and adopts new tariff measures,” Commerce Ministry spokesman Gao Feng said…………………..The two governments already have imposed penalty duties on $50 billion of each other’s exports………………Beijing has rejected pressure to scale back plans for state-led development of champions in robotics and other technologies………………..U.S. officials say that violates China’s free-trade commitments and worry it might erode American industrial leadership.

Some Chinese exporters say U.S. orders have declined, but Chinese leaders express confidence the economic impact will be modest: The United States buys about 20% of China’s exports, but trade has shrunk over the past decade as a share of the Chinese economy.“We are confident, capable and able to maintain steady and healthy development of the Chinese economy,” Gao said