#AceFinanceNews – June.20: The European Commission announced Wednesday that it had approved initial retaliatory tariffs on US exports worth €2.8 billion ($3.2 billion): The tariffs will hit American products including motorcycles, orange juice, bourbon, peanut butter, motor boats, cigarettes and denim. They are a response to the Trump administration’s tariffs on steel and aluminum exports from Europe #AceFinanceDesk reports

“We did not want to be in this position,” said EU trade official Cecilia Malmström. “The unilateral and unjustified decision of the US to impose steel and aluminum tariffs on the EU means that we are left with no other choice.”

The European Union has also filed a case at the World Trade Organization: If the trade dispute continues or is not resolved by the WTO, the European Union said a second batch of American exports worth around €3.7 billion ($4.3 billion) a year could eventually be targeted…………………….That list includes roughly 160 products such as US sunbeds, paper towels, corduroy pants and porcelain tableware.

The United States imposed tariffs on steel and aluminum from the European Union, Canada and Mexico last month. The Trump administration justified the move on national security grounds…………Canada and Mexico have also announced retaliatory tariffs against the United States………..Earlier in June, Mexico imposed a series of tariffs on $3 billion worth of US exports of pork, apples, potatoes, bourbon as well as different types of cheese…………Canada said its tariffs of up to 25% on nearly $13 billion of US products will take effect on July 1.

“Experience shows that even if an agreement between France and Germany is not enough for an final agreement it is true that an agreement without such an understanding is unthinkable………………The condition sine qua non is that Paris, Berlin and Brussels move forward together,” he said.

#AceFinanceNews – June.20: President Donald Trump just raised the stakes in the fight with China over trade: The White House said Monday evening that if China goes through with its promise to retaliate against the US tariffs announced last week, the United States will impose tariffs on an additional $200 billion worth of Chinese goods #AceFinanceDesk reports

“Further action must be taken to encourage China to change its unfair practices, open its market to United States goods, and accept a more balanced trade relationship with the United States,” Trump said in a statement: The Trump administration said Friday that it will impose a 25% tariff on $50 billion of Chinese exports. China, claiming the United States had “launched a trade war,” retaliated almost immediately, outlining its own tariffs on US goods worth $50 billion.

The escalating conflict between the world’s two largest economies has rattled markets and companies, which fear disruption to their global supply chains…………The Chinese Commerce Ministry reacted quickly to Trump’s announcement, accusing the United States of “extreme pressure and extortionist behavior” and warning it would “strike back hard.”

American businesses brace for pain from trade fight with China Trump tariffs, which the US government says are punishment for intellectual property theft, will be enacted in two waves. More than 800 exports, about $34 billion worth, will be subject to tariffs starting July 6. Another 280 or so still need to undergo a public comment period, and will take effect later.

Trump said Monday that China’s response “indicates its determination to keep the United States at a permanent and unfair disadvantage.” China’s tariffs would target agricultural products, cars and seafood, among other items.

“China apparently has no intention of changing its unfair practices related to the acquisition of American intellectual property and technology,” he said. “Rather than altering those practices, it is now threatening United States companies, workers, and farmers who have done nothing wrong.”

He directed Trade Representative Robert Lighthizer to identify $200 billion worth of Chinese goods for additional 10% tariffs, which would be enacted “if China refuses to change its practices, and also if it insists on going forward with the new tariffs that it has recently announced.”

In a separate statement, Lighthizer said that he supported Trump’s action and that his agency “is preparing the proposed tariffs to offset China’s action.”

The planned new wave of tariffs would have to go through a similar process of public consultation and comment as the earlier ones before taking effect.

“If the United States loses its senses and comes up with a new list, China will be forced to strike back hard, and launch comprehensive measures that match the US move in quantity and quality,” the Chinese Commerce Ministry said in a statement Tuesday.

But Beijing faces challenges in retaliating directly: China ships far more goods to the United States ($505 billion last year, according to US figures) than come back in the opposite direction ($130 billion).

To respond to Trump’s threat to impose tariffs on as much as $250 billion worth of Chinese goods, Beijing would have to find other ways to respond.

Analysts say the Chinese government could target trade in services between the two countries rather than physical products. That means things like tourism and education, industries from which the United States benefits a lot more than China does.

Beijing could also seek to make life difficult for big US companies that rely on the Chinese market for a big chunk of their revenue. It showed a willingness to do that to South Korean businesses last year during a period of tension between the two Asian countries.

Trade war: America risks killing the global growth it needs as top US brands such as Apple, GM and Boeing generate large amounts of sales in China.

In an interview with CNN earlier this month, Apple CEO Tim Cook said he didn’t expect a full-blown trade war to break out and dismissed the notion that iPhones, which are assembled in China, would end up subject to tariffs.

But analysts say it’s unclear which government will back down in the confrontation, predicting both economies will be able to withstand the initial waves of tariffs without much impact on overall growth.

“Neither side will be brought to its knees — which is one reason to think the trade dispute could drag on,” research firm Capital Economics said in a note to clients on Friday. “For China’s part, its leaders will be determined not to be seen to back down to foreign pressure.”

More on the days market news and these tariffs here: https://cnnmon.ie/2t8TwEz pic.twitter.com/2J2GWdPGf0

#AceFinanceNews – June.20: “Turkish F-35 pilots and maintainers have arrived at Luke Air Force Base and will begin flight academics soon,” he added: Although Turkey has long been a participant in the development of the F-35 program, the US Senate had sought to block Turkey from receiving the stealth warplanes through language in the National Defense Authorisation Act amid a deterioration of the US-Turkey relationship #AceFinanceDesk reports

The Senate’s version of the defense bill expressed concern over Ankara’s planned purchase of the S-400 anti-aircraft system from Russia and what it labeled Turkey’s unlawful and wrongful detention of Andre Brunson, a US citizen: Many US officials have expressed concern that a major Russian military system like the S-400 would be incompatible with the NATO systems used by Turkey’s alliance partners: 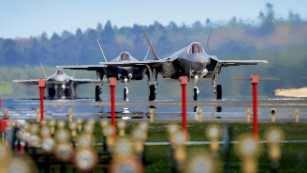 A US defense official told CNN that Mattis is opposed to congressional attempts to block Turkey’s receipt of the advanced warplanes. The official says Mattis has been actively engaging with members of Congress in an attempt to ensure that the language in the Senate’s version of the defense bill does not make it into the final version to be signed by President Donald Trump.

The Senate overwhelmingly passed its version of the defense authorization bill on Monday.

Congressional efforts to block the sale to Turkey have drawn criticism from Turkish officials.

“We have been in that program, including some joint production, production of the parts of F-35s in Turkey,” Turkish Foreign Minister Mevlüt Çavuşoğlu told PBS earlier this month.

“Turkey has been paying the installments on time, on due time. And Turkey have met all the requirements, but you cannot cancel this because of the S-400s that we are buying. It is a totally different issue,” he added, saying Turkey should not be forced to choose between the US and Russia.

Andrews said the Department of Defense “does not comment on proposed legislation,” adding that “Turkey is a close, key NATO ally, and has been an international participant with the F-35 program since 2002.”

The Senate bill still needs to be reconciled with the House’s version and the final version would need to be signed by the President.

Twelve countries participate in the F-35 program. The nine partner nations that participated in the plane’s development include the US, Turkey, UK, Italy, Netherlands, Canada, Australia, Denmark and Norway. All of these countries except for Canada, Denmark and Turkey have already begun receiving deliveries of the F-35 aircraft. Israel, Japan and South Korea have also received the jets through foreign military sales.

Despite opposition from US Congress, Turkey will receive its first F-35 Joint Strike Fighters on Thursday https://cnn.it/2M752HB pic.twitter.com/ySf5N9vHKl