#AceFinanceReport – May.01: RBS branches in England and Wales, and the NatWest business in Scotland, had been earmarked for a new “challenger bank” under the name Williams & Glyn…………However, that project is now not going ahead and the bank has reviewed its branch network…………..Some 109 branches will close in late July and August 2018, while a further 53 branches will close in November 2018: The latest branch closures follow existing plans to close 52 bank branches in Scotland that serve rural communities, and 197 NatWest branches………..The Unite union has calculated that in the case of 71 of the 162 branches closing, customers will be forced to make return journeys of about 25 miles to reach another one………. Rob MacGregor, Unite’s national officer, said: “The Williams & Glyn saga rolls on as Royal Bank of Scotland continues with its shambolically poor management of this business. #AceFinanceDesk reports

You can see a full list of the branches that will be closing here.

An RBS spokesman said: “We are no longer launching Williams & Glyn as a challenger bank, and we now have two branch networks operating in close proximity to each other; NatWest and Royal Bank of Scotland, in England and Wales:

“As a result, we have had to review our overall branch footprint in England and Wales and we’ve made the difficult decision to close a number of Royal Bank of Scotland branches.

“Customers of Royal Bank of Scotland in England & Wales will be able to use NatWest branches instead for their everyday banking needs.” 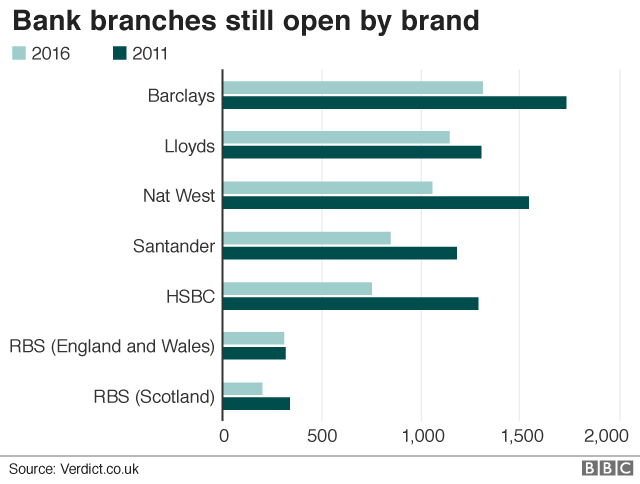 “How does a taxpayer-funded institution spend £1.8bn on a failed IT project and in the next breath demolish the much-needed local bank branches?

“Today nearly 1,000 employees have finally been told of their dark futures because the bank has been calamitously managed for too long.”

In February, following a campaign by local communities, RBS decided to keep 10 branches threatened with closure open till the end of the year.

Nicky Morgan, who chairs Parliament’s Treasury Committee, said there was “a risk of increased levels of financial exclusion” as a result of the branch closures, since bank branches were still vital for many people.

“It’s important for the government to monitor this trend. If financial exclusion is increasing, the government may be required to intervene,” she said.

Staff were braced for something like this, though the scale of the closures and job losses is a shock.

Last year the European Commission said RBS could forget about trying to hive off part of its business and, instead, set up a fund to support new rivals.

Ever since then the writing was on the wall for most of the people and branches which RBS had shoved into Williams & Glyn, a Frankenstein bank which no one seemed to want.

That was the trigger, but it’s also a fact that big banks have been looking for excuses to close as many branches as they can.

And they would have you believe it is partly your fault, if you’ve joined the legions who bank on computers and mobile phones.

For customers wondering where it will all end, it seems inevitable that we will end up with even fewer branches.

Those that survive may be dedicated to selling complicated products like investments and pensions, and sorting out tricky complaints.

Unite is calling on RBS “not to abandon their responsibilities” to the communities that depend on the affected bank branches.

However, the bank has faced criticism from customers that the mobile banks do not stop in each location for long enough. 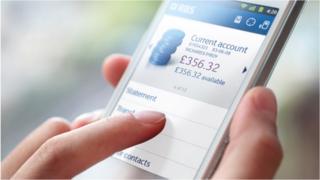 But the bank has had to recognise that not everyone wants to handle their banking digitally.

To this end, today it announced that it had created a special taskforce to help customers learn digital skills so they could use online banking in future.

Royal Bank of Scotland is to close 162 branches in England and Wales, resulting in nearly 800 job losses https://bbc.in/2rdPl8s

#AceNewsReport – May.01: As they scramble to roll over some 40 European Union trade deals into individual agreements with the U.K., London has its eyes on plenty of additional negotiations. Growth-blessed Southeast Asia, with which it traded 32 billion pounds’ ($44 billion) worth of goods and services in 2016, is a priority: Southeast Asia is poised to keep up its steady growth pace through 2019: Source: Asian Development Bank: “ It’s really important, particularly in the #Brexit context, to see that Britain is remaining the same outward-looking, engaged country as it always has been,” Hands said in an interview Sunday in Singapore” “ There’s a lot more we could be doing – our trade with, say, Indonesia is quite low.” #AceFinanceDesk reports

The U.K. already has ramped up resources to boost its trade with Southeast Asia. Fresh intellectual property attachés in major capitals are adding to the 90 U.K. officials dedicated to trade in the region, said Hands. Fellow Tory MP Ed Vaizey was recently appointed as a trade envoy to the region, with particular focus on Vietnam, Cambodia and Laos 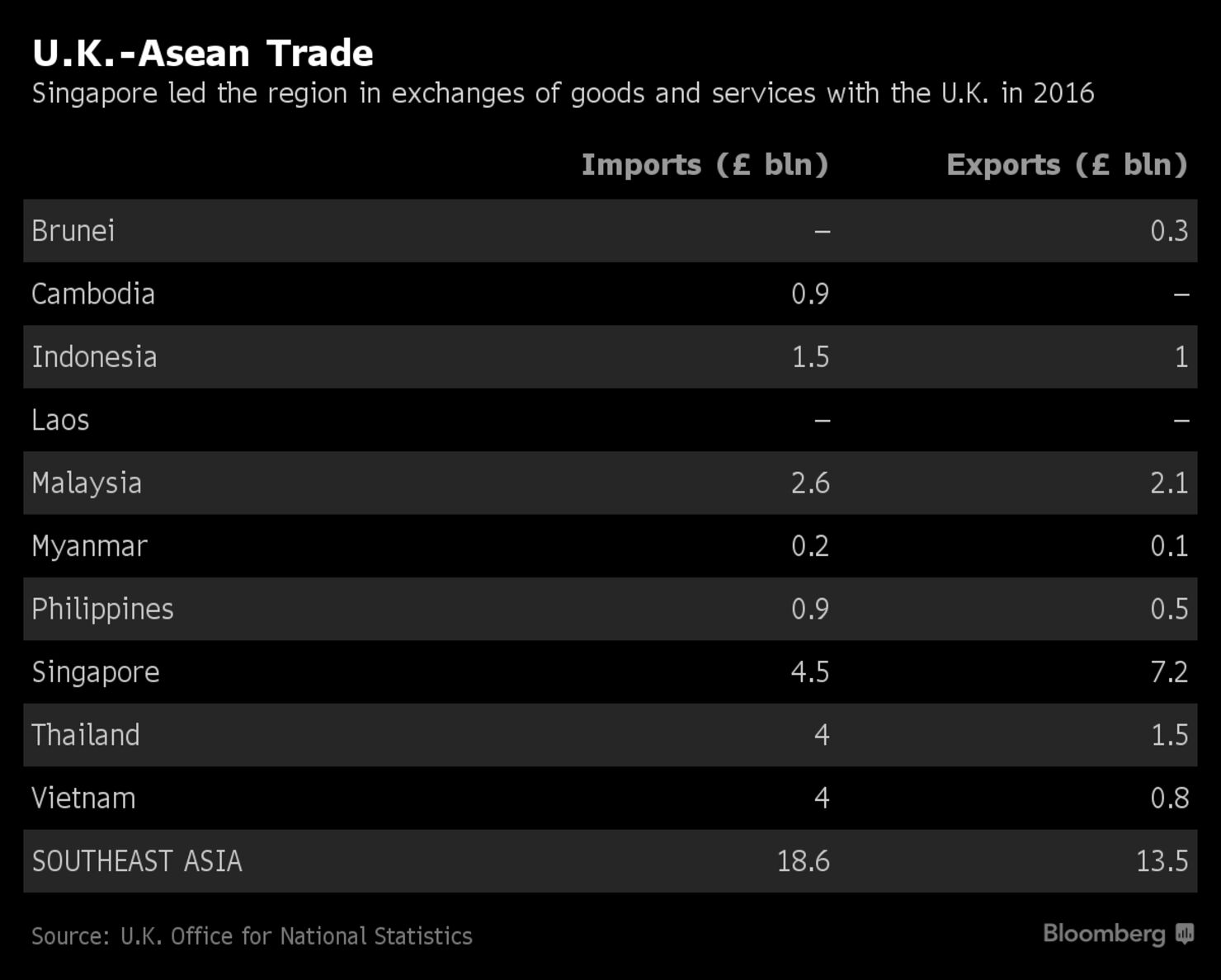 He also met with trade representatives from Cambodia, Laos, and Myanmar, while warning that “obviously we cannot conduct trade entirely independently of politics and humanitarian crises,” referring to the possibility that the ongoing Rohingya crisis in Myanmar could imperil burgeoning trade prospects………The Asean leaders’ meetings, following the finance ministers’ gathering earlier this month, represented another occasion for the region to emphasise its staunch pro-free trade position.“More and more countries are feeling that we need to be advocates for trade,” said Hands. “If countries like the U.K. and Singapore aren’t making the case for trade, then we really would be in trouble.”

At the same time, Hands said he doesn’t think a “trade war” is brewing between the U.S. and China……………“Obviously there are a number of trade disputes around the world, as there always are,” he said. “I think we’re concerned about the position of trade around the world, but I wouldn’t use language like that.”

Hands was also tasked with doing his best to convince trade partners in the region that Brexit won’t alter the U.K.’s existing trade arrangements with Asean economies, or impede negotiations for new deals…………..Some U.K. lawmakers have been skeptical that Prime Minister Theresa May’s government will be able to transition those E.U. deals when the Brexit negotiation period begins in March 2019, with any new agreements effective from the start of 2021: Two of those E.U. agreements are with Singapore and Vietnam: U.K. seeks new deals throughout Southeast Asia, trade minister says https://t.co/YPaKQo8OgR https://t.co/6qlnTOeUxZ https://t.me/Bloomberg/203151

#AceFinanceReport – May.01: The European Commission criticized the temporary extension in a statement Tuesday, saying the EU has been willing to discuss the issue and “will not negotiate under threat.” “The U.S. decision prolongs market uncertainty, which is already affecting business decisions,” it said. “The EU should be fully and permanently exempted from these measures, as they cannot be justified on the grounds of national security.” #AceFinanceDesk reports

Trump has called the tariffs a national security issue because overproduction by some countries makes U.S. exports more expensive and undesirable on the global markets. The White House also announced late Monday it reached a final deal on steel exports with South Korea — granting it a permanent exemption — while reaching agreements in principle with Argentina, Australia, and Brazil. “These agreements underscore the Trump administration’s successful strategy to reach fair outcomes with allies to protect our national security and address global challenges to the steel and aluminum industries,” a White House statement said: Trump imposed a 25 percent tariff on steel imports and 10 percent on aluminum in March on China, Russia, Japan, and other exporters to for what he says is a remedy for unfair competition. U.S. Treasury Secretary Steven Mnuchin and other senior U.S. officials head to China this week for trade talks……………………..Canadian Prime Minister Justin Trudeau said Monday imposing tariffs on Canadian steel and aluminum would be a major disruption because U.S. and Canadian industries — including U.S. car and fighter jet manufacturing — are closely integrated……………….German Chancellor Angela Merkel is warning of a possible trade war if the U.S. does not grant the European Union a permanent exemption: USA – Voice of America https://t.me/acebreakingnews/700982