#AceFinanceNews – Featured Report:Sept.14: The problem with micromanaging the economy is that things become rather complicated. That’s why China needs two currencies, one for the mainland, one for international banks. Since the devaluation on August 11, it seems China is losing control of both.

The Renminbi (RMB) or yuan is used within mainland China and can be exchanged for other currencies very restrictively. It is primarily used in trade but also for tightly regulated inbound and outbound investments.

There is no real market for this exchange rate, instead the People’s Bank of China (PBOC) comes up with a fix every day and then trades around it.

“Nobody knows officially how China gets to its fixing. It’s still a black box. It says it takes prices from many banks, more than a dozen, including foreign banks,” Marc Chandler, a senior vice president and head of currency for Brown Brothers Harriman in New York told Bloomberg.

So the PBOC would “fix” the rate in the morning and then intervene in the markets to keep it from moving further than 2 percent in either direction.

This is how China acquired its massive pile of foreign exchange reserves: As it was running a trade surplus, dollars were chasing yuan to pay for the vast quantity of goods China was shipping to the United States every year.

In the process—because of all the money printing to buy dollars—the PBOC’s balance sheet zoomed from less than $1 trillion in 2002 to $6 trillion in 2014.  As a comparison, the Federal Reserve’s maximum balance sheet size reached in 2015 was only slightly more than $4 trillion.

Full article: China Actually Has Two Currencies—And It’s Fiddling Around With Both (The Epoch Times)

#AceFinanceReport – Sept.14: One year after it filed the largest IPO in history, investor sentiment for Alibaba has never been lower. The company’s stock price currently sits at $63.37, a 37% decrease from its opening price on September 19, 2014. Following a mediocre earnings report in August, several reports have questioned the company’s business model, most recently a lengthy piece in Barron’s over the weekend that predicts a further stock slide of 50%. 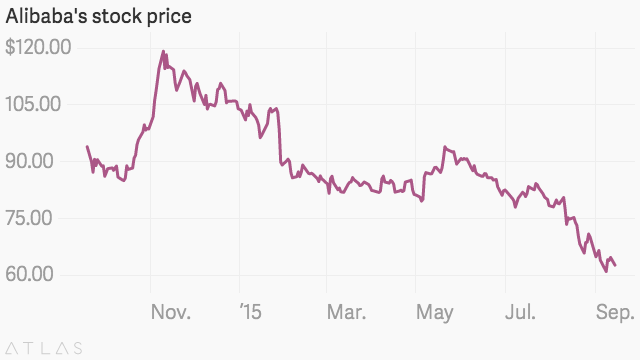 Alibaba responded by questioning Barron’s methodology and conclusions, but the company’s stock may be hard hit in US trading today—it is already down 2.1% in premarket trading.

Investors are gloomy about Alibaba. Short interest for Alibaba has skyrocketed in recent weeks: 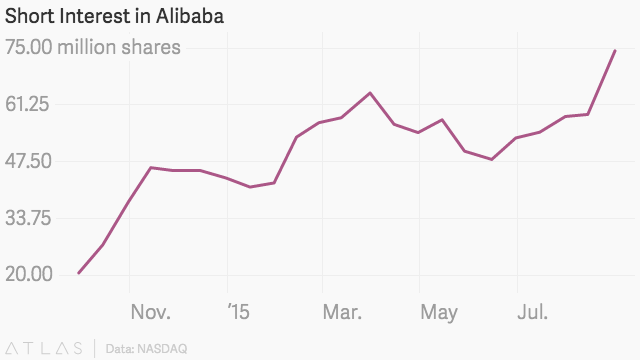 Some analysts and investors appear to be viewing Alibaba as a proxy for China’s economy, and selling on fears of China’s slowing.

But this strategy belies the enviable position Alibaba continues to hold in China—it’s far and away the leader in China’s $ e-commerce industry. As of the first quarter in 2015, it occupied 58% of the market for business-to-consumer e-commerce. JD.com, its closest competitor in that segment, is a distant second with 22% of the business-to-consumer market. And while JD.com is catching up, Alibaba remains the unparalleled leader in China’s consumer-to-consumer e-commerce with Taobao. Taobao and Tmall collectively clocked in $94 billion in gross merchandise volume during the quarter ending in March 2015, while JD brought in $14.2 billion. 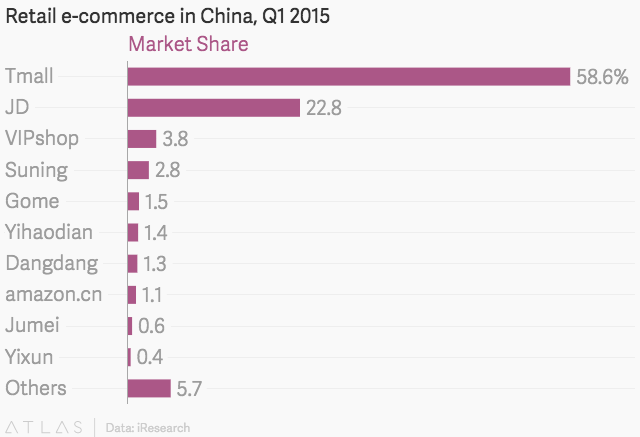 Despite concerns that consumers will spend less because of China’s slowing economy, China’s e-commerce industry as a whole is also set to grow. That’s because e-commerce is more deeply entrenched in China than in most other markets, but still no where as widely available. It acts as a substitute for an underdeveloped brick-and-mortar industry, and e-commerce sales make up an estimated 10.7% of total retail sales in China, compared to 7% in the US.

E-commerce sales will continue to grow at a rate of 20% year-on-year through 2017, iResearch estimates, with annual transaction volumes hitting 6 trillion yuan (about $941 billion) in 2017. Much of that growth will come from rural areas, where both e-commerce and retail brick-and-mortar remain underdeveloped. And while Alibaba’s sales growth is slowing, it is still higher than that.

Alibaba itself expects that overall sales to China’s rural populations will grow from 180 billion yuan ($29 billion) in 2014 to 460 billion ($75 billion) by 2016. Both Alibaba and JD are racing to reach these customers, and Alibaba has pledged 10 billion yuan ($1.5 billion) to develop delivery and drop-off centers in the country’s remotest parts.

It’s true that e-commerce will inevitably slow in China once its rural population enjoys the infrastructure and incomes necessary to buy things online regularly. This is why Alibaba, like any savvy business with cash to spend, has diversified. Its film unit Alibaba Pictures operates at a loss, as many new business units do. But film is one of the best industries to be in in China right now—box office revenues will soon surpass those from the US, and if the government gets its way, more and more of those ticket sales will go back to Chinese studios, not Hollywood ones. Its cloud unit, meanwhile, also looks promising, if the monster revenues of Amazon’s AWS are any indication.

Since China’s stock market crash this summer, investors have been banned from shorting stocks in China, and it is possible they are projecting fears of China’s slowdown on stocks like Alibaba instead. But Alibaba is not the Chinese economy, Alibaba is a single company in China.

#AceFinanceNews – Sept.14: Moscow and Brussels may have reached an agreement on the terms of Russian gas deliveries to Ukraine this winter.

The EU appears set on providing Kiev with $500 million with which to purchase an 2 billion cubic meters of gas, with Russia to offer Kiev a small discount lasting to the end of the winter heating season.