About time we stop child exploitation by offering bribes to eat their food!

The sheer fact that the ” Love of Money is the Root of all Evil” that maybe as much as l may agree in the words ” In God we Trust” should it be on the mighty dollar? 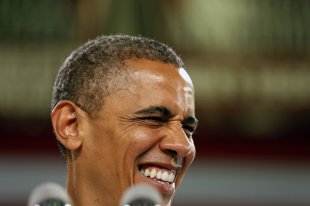 President Barack Obama smiles during a campaign event at the Florida Institute of Technology in Melbourne, Florida …”The president believes as much that God should be taken off a coin as he does that aliens will attack Florida.”

That’s the response from Obama campaign spokeswoman Jen Psaki to Mitt Romney‘s apparent suggestion at a Virginia Beach, Va., rally on Saturday that Democrats hope to take “In God We Trust” off American money. There is no such effort.

“Look, this is nothing more than a desperate attack based on a false premise by the Romney team, and it’s sad that the debate has been driven to this level of discourse,” said Psaki. “It’s an absurd question to be…

After Ben Bernanke took the stage in Jackson Hole last week to rather defensively suggest the Fed will act soon, Thursday is Mario Draghi’s turn.

Before we get into the details of what the ECB could announce, a quick update on the European debt crisis: It’s still there. Yields for Spanish and Portuguese debt are at or above the 7% danger zone, and Italy is publicly complaining that their debt costs have little basis,Jens Weidmann, Germany’s top central banker, meanwhile, is reportedly both isolated and threatening to quit over his opposition to the ECB buying debt of struggling EU countries.

In a closed-door meeting in Brussels yesterday, Mario Draghi told the European Parliament that he’d be comfortable buying EU members’ bonds with maturities of three years or so. This, Draghi reportedly said, wouldn’t violate EU treaties. (Bill Gross tweeted that this bond-buying program would be something like writing “2-3 year checks”).

Of course, ECB bond-buying has been the summer’s worst-kept secret. As the WSJ’s Matt Phillips noted, Draghi said this on July 25: “To the extent that the size of these sovereign premia (in Spain and Italy) hamper the functioning of the monetary policy transmission channel, they come within our mandate”.

Draghi’s hints mean that three years into the European debt crisis, the ECB may finally return to limited, direct financing of struggling governments. Analysts, however, are all over the map about what the ECB may actually announce after its meeting on Thursday, and whether it will involve yield caps.

One safe bet: more political entanglement. Even though Draghi insists the ECB is not political, his actions are still very much wrapped into discussions on what he recently called “the sharing of powers and of accountability”. Or, as Nomura put it: “Just imagine if the Fed had to play tough with California or worse Texas for example, to effectively impart monetary policy”.

The Economist‘s Charlemagne blog has a great description of Draghi’s predicament: He simply can’t fix Europe without the help of the continent’s leaders:

So finally after all the wheeling and dealing Mario Draghi got his own way and opened Pandora’s box and now we wait! This is the fact that the ECB the “lender of last resort” has finally supported ” buying up debt” and letting it be sold as ” junk to the highest bidder.” We can all con ourselves this is for the good of the euro zone but really we know it is for the good markets and nobody else!The real winners short-term are the gamblers of our food,oil and lives!

The control of the masses by the few is how we should see it and the sheer fact that our lives are controlled by a simple but very effective piece of paper called simply a “share.” Well now we own a share of ” gambling debt” a little like an IOU that will never be repaid! So instead of having ” junk bonds” we now have junk funds, capitalise by gambling debt!

And as we all know when you are in debt one day you have to repay pay it or eventually declare bankruptcy!